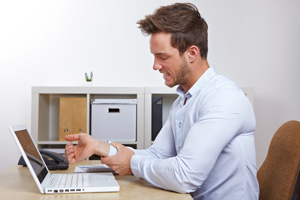 Repetitive Strain Injury (RSI) is a potentially debilitating condition resulting from overusing the hands to perform a repetitive task.

The way we work has a big effect on whether we will suffer from wrist and arm pain. Pain in the wrist and arm pain can be prevented and relieved by using ergonomic mice, and ergonomic keyboards. An arm support to rest your fore arm will help relieve strain.

An arm support to rest your fore arm will help relieve strain.  According to Swedish survey conducted in 2009, 47% of computer users experience occasional discomfort and 24% suffer regularly recurring problems.

RSI in the workplace, including, but not limited to tendonitis and carpal tunnel syndrome, have risen to pandemic proportions during the past 5 years.

Even with these tremendous costs to businesses, individuals, government and taxpayers the problem continues to be ignored, resulting in even greater number of workplace injuries and overall costs.

“Musculoskeletal disorders” are the country’s most costly category of workplace injuries and illnesses. In addition to spending $20 Billion annually on workers’ compensation costs due to RSI, the US spends another $100 billion on lost productivity, employee turnover and other indirect expenses.

Discover our wide range by booking a showroom consultation or by shopping online!