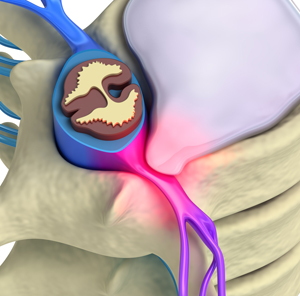 Bulging disc in neck or slipped disc, as they are more commonly known are best characterised by the presence of sharp stabbing pain which becomes worse with movement.

Thus it is not uncommon to see patients with a slipped disc in neck presenting with frequent episodes of excruciating pain which could force them to lie down.

Thus it is evident that when describing spine pathology, different doctors would use different terminologies for the same condition.

SYMPTOMS OF HERNIATED DISC IN NECK

A spinal disc in the neck region is essentially a pad filled with gel which is positioned in between two vertebras.

This works as a shock absorber and prevents the vertebra from rubbing against one another during movement.

A herniated disc in neck is primarily a bulging disc in neck which has weakened perceptibly and has now begun to protrude from the back of the spine. The symptoms of herniated disc in the neck can vary from mild to severe depending on the location of herniation and the presence of nerves around the region. The more common symptoms may include the likes of a tingling or numbing sensation in the arm which originates in the neck and reaches the arms and the fingers.

Thus it is evident then even if you are diagnosed with a bulging disc symptoms of herniated disc in neck may surface at this point of time.

BULGING DISCS – THE CAUSE

One of the most common causes of bulging discs is a road traffic accident which may result in the disc bulging outside the spinal outline. On the contrary age linked bulging discs are invariably an outcome of advancing age which may lead to a slipped disc in neck in some instances as they tend to weaken due to extensive wear and tear.

The mechanics are simple, considering that as we age they become inelastic and lose their hydration thus leading to a brittle state. Concurrently the ligaments surrounding or adjacent to the bulging disc may also become brittle thus triggering off an early tear and subsequent damage to the disc.

Those diagnosed with slipped disc may present with symptoms of herniated disc in neck. The more popular options may well include nonsurgical options like medications, exercises, physical therapy and even chiropractic care per se. If statistics are any index more than 95% of patients would respond to this non – surgical option.

On the contrary bulging discs may require neck surgery as a last resort in just under 5% of the patients. When it comes to neck surgery options, the most popular procedure is to fuse the bones using metal screws so as to ensure that frequent movement at the location is minimized thus ensuring a stabilized and pain free joint. The procedure is better known as spinal fusion surgery in medical parlance. Although a relatively successful surgical option spinal fusion has a major limitation wherein movement in the region of the neck is completely lost thus leading to total immobility.

One of the most viable options to spinal fusion is about replacing the degenerated disc with an artificial one which offers mobility and flexibility to the patient and could well enhance quality of life for most patients.

Thus it is more than evident that if the diagnosis is a bulging disc and the presentation is suggestive of symptoms of herniated disc in neck the modality of treatment is diverse and could range from exercise and medications to even radical surgery.

Neck support is critical for someone who has sustained a bulging disc in their neck, ensuring you can periodically take the weight of the neck muscles and spine periodically and rest the muscles and spine is critical. Specialist chairs can be specifically adapted to give a constant support to the user if needed, with an extended an extra curved neck rest. The advantage of this additional support is it rests the neck and the shoulder muscles, thus ensuring that pain symptoms are minimal.

As we spend a huge portion of our lives in bed, it is really important to get the right pillow to support your spine at its neutral posture. This could include a soft neck roll or a firmer neck roll depending on personal preference. It is important to have the best pillow for you as you sleep.