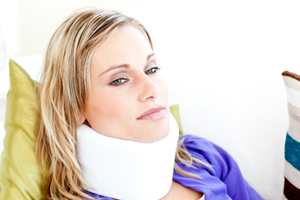 Whiplash neck injury is predominantly an injury of the neck which involves both the bones and the soft tissue in the region.

The mechanics are logical, considering that when there is a sudden acceleration or deceleration or a road traffic accident between two vehicles where the impact is from the rear end it moves the head and the neck forwards and then backwards thus leading to an injury of the neck region.

Although relatively common, whiplash neck injury is not a life threatening condition and the patient invariably recovers with little or no residual damage. Nevertheless it is an expensive burden on the national exchequer. This is more than collaborated by statistics indicating that well over 30 billion dollars are spent annually on the treatment and rehabilitation of whiplash patients in theUSalone, similar costs are thought to be spent throughoutEurope. The cost is both direct as well as indirect considering that whiplash neck injury disability and medical care is just the tip of the iceberg. Some of the expenses could be attributed to loss in productivity and even litigation costs.

Whiplash is not new to mankind considering that the term was first coined way back in the year 1928. On the contrary the condition was known to man even prior to 1928 when it was termed as ‘railway injury’. The term is suggestive considering that it was usually associated with those involved in train accidents. The present day whiplash injuries are more often associated with road traffic accidents.

There are a range of symptoms usually associated with whiplash neck injury and could include the likes of headache, dizziness, neck pain, shoulder pain and even tinnitus or ringing of the ear. Fortunately the condition is self-limiting and the symptoms usually settle down spontaneously, it is not uncommon for symptoms to persist even years after the road accident.

When it comes to treating whiplash, one of the most important modalities is about educating the patient about her disease condition and to reassure that the condition is temporary and confirm that most patients recover from this relatively common condition.

While the bone structures and the affected muscles are healing, it is important that adequate whiplash support is ensured by early use of pillow for whiplash which is just as effective as other supports such as chairs specifically designed to support whiplash injuries with extended and extra curved neck rests to give a constant support for the user.

It is now evident that neck support is critical for someone who has sustained a whiplash neck injury, thus using a customised chair for whiplash is critical. This innovatively designed chair is essentially an orthopaedic, ergonomically designed chair with an additional neck support. The unique advantage of using this additional support is that it can rest the muscles of the neck and the shoulders, thus ensuring that pain symptoms are minimal. Alternatively whiplash support may be ensured by using ergonomically designed chairs which in addition to neck support would also tilt the seating pan forward as you stretch and push backwards on the back and the neck support.

Statistics indicate that we invest a staggering 33 percent of our life sleeping and those who have sustained a whiplash injury are no different. Thus it is critical that the perfect pillow is used by those who have a whiplash neck injury which may include a soft neck roll or a firmer neck roll depending on personal preference. The new age pillow for whiplash comes replete with adjustable heights and cervical supports. Although no one pillow can fit all, depending on sleeping postures and personal preferences the perfect whiplash treatment demands using the right pillow.