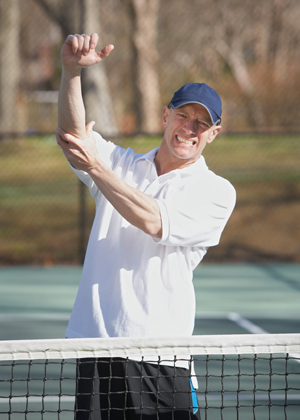 Tennis elbow or lateral epicondylitis as is better known in medical parlance is best characterised by localised tenderness and soreness located in the region of the outer elbow. The condition is essentially an age linked disease condition which is more common in age groups 30 - 50 years old and is more common in men, compared to women.

Tennis elbow is not a new condition considering that it was first identified way back in 1873. This is essentially a degenerative age linked condition which develops with advancing age. Elbow pain typically develops due to prolonged overuse of the hand and forearm there could well be numerous reasons for this condition to develop, the most common ones being playing tennis, working on computers and even assembly line operations.

The name is suggestive considering that although the disease is not limited to tennis players, statistics indicate that well over 50% of all tennis players contact tennis elbow pain at least once in a lifetime. On the contrary only 1% to 3% of the general population contract this condition. The increasing use of computers in recent times has led to a greater number of elbow pain cases being attributed to ergonomically incorrect postures and adjustments while working on computers. Thus it is scarcely surprising that tennis elbow is often referred to as ‘computer elbow’.

Tennis elbow typically presents with tennis elbow pain and is conventionally classified as a type of tendinitis. Nevertheless recent advances in healthcare have now reclassified the disease as a tendinopathy. This is not surprising considering that tendinitis is inflammation of the tendon while tendinopathy is a Greek word which means something is wrong with the tendon.

The treatment for tennis elbow predominantly focuses on reduction of pain and inflammation at the elbow. This is best achieved by using a combination topical creams, steroid applications and injections. Nevertheless the most effective and permanent cure for elbow pain is usually physiotherapy and brace supports.

When this elbow pain aggravates on shaking hands or even lifting a relatively light object the diagnosis is evidently ‘Tennis Elbow’ and is best controlled by some diverse options. The global perspective is that 90% to 95% return to normal states while just fewer than 5% would require surgery.

As statistics indicate that a very common cause of tennis elbow is heavy computer usage thus it is more than evident that ergonomics is predominantly about the way you use computers and the adjustments that one makes to their equipment.

Keyboards have been conventionally used with the back of this typing device being at a higher level as compared to the front. This was inspired by the more traditional typewriters however this is ergonomically incorrect. If you want to treat or prevent the condition then the preferred option is to keep the entire keyboard at one level. The logic being that one would not want to cock the wrist and hence strain the muscles of the forearm.

Concurrently using a wrist pad artificially elevates the heel of the hand thus minimizing tennis elbows in general and tennis elbow pain in particular. Thus the treatment of tennis elbow is as much about treating the condition as it is about correct positions and hence positive ergonomics.